A little while ago, I took to my laptop to attempt the impossible task, of condensing the journey of my disorder into one article. If you haven’t read my first article about my illness, Eosinophilic Oesophagitis (EoE), you can find it on this website under the title ‘Tube Faced.’

If you don’t want to go back and read Tube Faced, or you have read it but need a brief reminder of my condition, here’s a summary:

Throughout my teenage years and some of my childhood I was plagued with mysterious symptoms that affected my breathing, heart rate, energy levels and digestive system. These symptoms were always something I brushed under the carpet. Then one day, aged sixteen, I woke up and could no longer eat. After rounds of testing, including multiple tubes and cameras being put down my throat and up my nose, I was diagnosed with EoE. A disorder that causes my own body to attack itself when I eat.

As the months went by I lived on a painfully restrictive diet, the weight began to drop off of me and the colour began to drain from my face. I was depressed, my eyes became sunken and I started to lose my hair.

Then a seemingly miracle cure was found by my own mother- as I mentioned in my previous post. The liquid steroids mixed with a powder called Neocate formed a paste that coated my throat when swallowed, reducing my symptoms. Although I still had to watch what I ate, this medicine gave me my life back.

I am writing this post today because a few weeks ago, I went to my local pharmacy to pick up my medication, to find that the manufacturers had stopped producing it. Luckily for me, they had replaced it with a newer version of the product. Despite this, the few days I went without medication affected me in a number of ways.

Not only did I relapse and begin to have  physical symptoms again (symptoms that still haven’t completely gone even now, six weeks later), but it sent my mind back into that place I thought I had come so far from. All of a sudden, reality hit me and I realised that, my life as I know it, completely depends on these medications. Suddenly, my mind was whirring with pictures of me being tube fed and becoming depressed, underweight and exhausted, once again.

After a recent hospital appointment with my consultant, I have been informed of multiple developments in the field of EoE. However, still, many doctors and consultants are refusing to research the disorder, because they are considering it to be ‘rare’ among patients. The sad fact is, more and more people, mainly children, are being diagnosed with the disorder I suffer from. We are now in the position where EoE can no longer be considered rare. Many patients are suffering, but the condition is still unresearched. 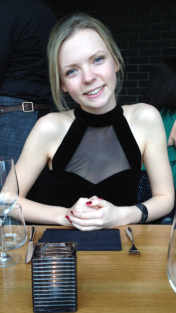 Above are four pictures. The first two are full body photographs. Photo 1 is before (when I was ill) and (photo 2) after treatment. The second are two close up shots. Photo 3 was taken when I was unwell and photo 4, when I had been treated. Feel free to click on them and notice how my hair, eyes, weight, skin colour and smile change so drastically between the before and after.

I think it’s clear from those pictures just how crucial it is that EoE is researched. The medication I take currently is not licensed yet as a treatment for EoE. As a steroid based medication, nobody can be sure of the long terms affects the medication may have on my body.

We must keep researching this disorder. We must find a treatment for EoE.

My medication made me. It gave me my life back.

“Eosinophilic Esophagitis- hard to say, even harder to live with.”

If you want to help raise awareness and research for EoE please visit the CURED website to donate.

One thought on “The Medicine that Made Me”